What is an Australian Cattle Dog?

Known as one of Australias most diligent dogs, Australian Cattle Dogs are always ready to face a day full of toil on the field. Though smaller than the cattle they tend to, these tireless workers are blessed with the strength, stubbornness, and spunk that aids in accomplishing great things in the jobs they are given.

Australian Cattle Dogs go by many other names: Australian Heeler, Blue Heeler (or Red Heeler, depending on its color), Halls Heeler, and Queensland Heeler. The term heeler alludes to their technique of biting or nipping the heels of the livestock they look after in order to move the herd.

The American Kennel Club (AKC), a United States-based organization maintaining information about purebred dog pedigrees and one of the most recognized dog breed registries in the world, categorizes dogs into 7 groups:

Among these seven groups, Australian Cattle Dogs are recognized by the AKC as a herding dog. These dogs prove to be very competent among their group, being one of the most intelligent breeds.

Traits of an Australian Cattle Dog

Many words describe Australian Cattle Dogs. Some of which are the following:

You can add more to the list upon adopting one of these intelligent dogs.

Their heads are strong, with broad skulls slightly curved between ears, which flatten to a slight but definite stop. They have dark brown eyes, which are oval and medium-sized. Cheeks are muscular and their underjaws are strong as well. Their teeth are gripped with a scissor bite, and their lips are clean and tight. The ears are of moderate size, wide-set, with a broad base and somewhat pointed at the end.

As naturally toned dogs, they have straight and muscular legs. They have, however, short toes and round feet. As for their coats, they have a smooth double one, accompanied with a short, dense undercoat. These coats come in various colors: blue, blue-mottled, blue-speckled, red, or red-speckled with or without other markings.

True to its popular name, the origin of the Halls Heeler is in Australia, when in 1802, a pioneer settler named George Hall and his family required droving dogs (dogs which aid in moving livestock) for their cattle. These cattle, which reached around thousands, had to be moved for numerous miles, through unfenced stock routes. The Smithfields and Old Smooth Collies they brought were not able to travel that kind of distance and were also unable to adapt to the harsh climate of their new settlement. Georges son Thomas became agitated that they lost hundreds of cattle at a time because their dogs werent able to herd the livestock properly.

Thomas Hall then crossed tamed dingoes to Dalmatians, Kelpies, and the other droving dogs they currently owned. By 1840, the result of his efforts paid off, as he was able to produce excellent droving dogs, who worked hard in herding their cattle. These dogs worked quietly but with authority, keeping the cattle on their feet and enabling them to cross vast distances under severe circumstances. Moreover, they had superior stamina which fit for Australias weather, and their herding and guarding instincts are absolutely excellent. For the next 30 years, these dogs have been known as the Halls Heelers, and have been exclusive to the family. This gave the Halls an advantage over other cattle breeders.

Only after Thomas Halls death in 1870 did the Australian Cattle Dogs, as they are known now, become available to the public. In 1893, Robert Kaleski, an associate of the most influential livestock breeder at the time, developed a standard for the said breed. This standard was approved in Australia in the year 1903.

Owners of this particular breed may find their dogs rather challenging. Australian Cattle Dogs can easily become bored and therefore, they must be mentally and physically stimulated at all times. It must be noted that these smart creatures also have great stamina, so it might take a while to get them satisfied. Long walks everyday proves to be a necessity. They also function best if they have something to do.

Since these dogs are naturally authoritative, owners must be able to exert their being alpha. They are not keen to pushovers so the owners must always have a stern attitude in dealing with them.

In turn, the Australian Cattle Dog will prove to be a loyal subject to its master and provide its utmost integrity and excellent company for the rest of its life, which spans around 12 to 15 years. 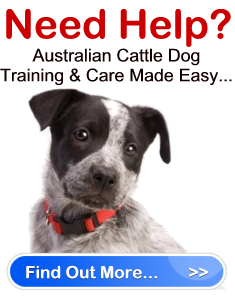